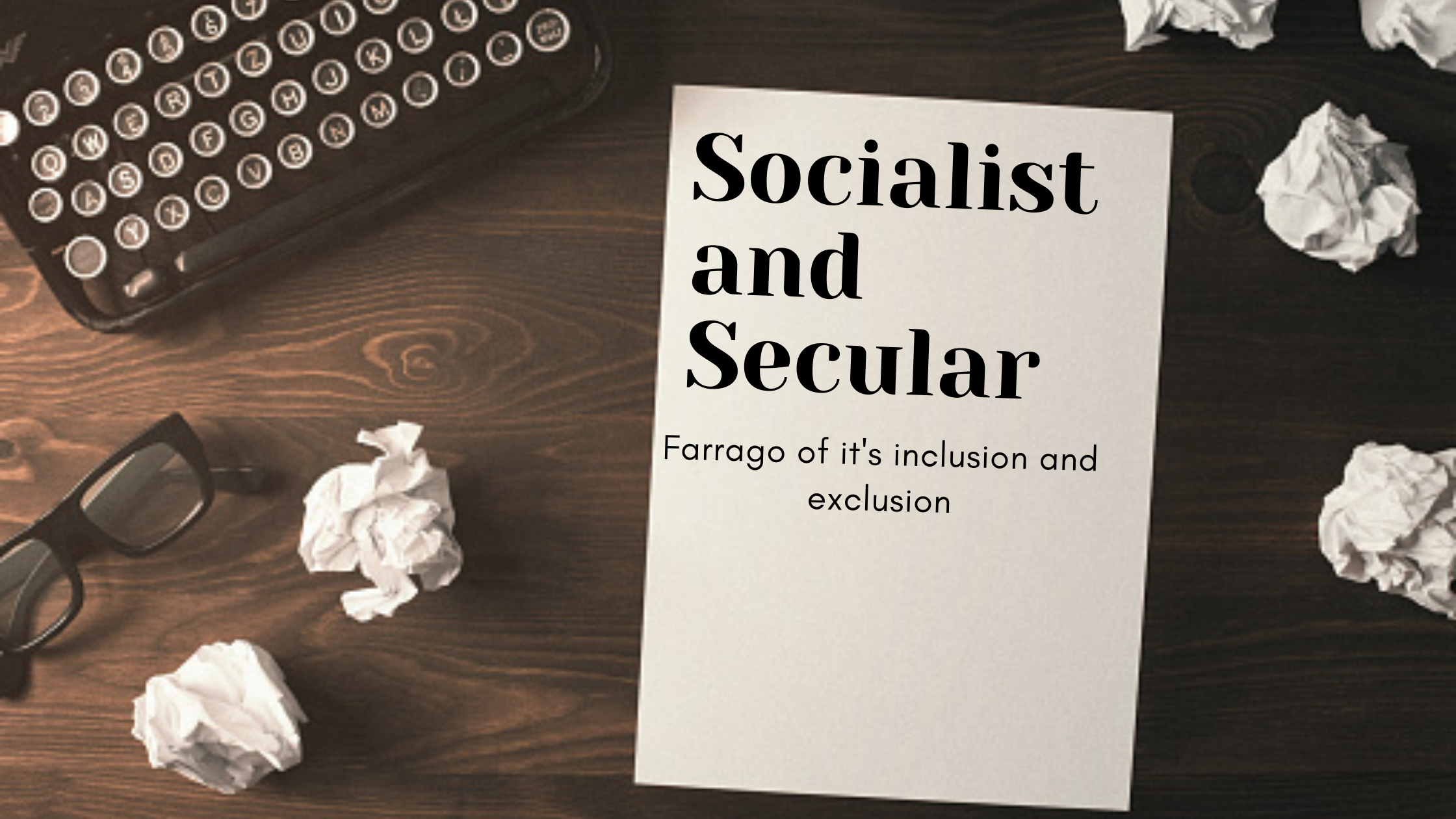 A plea has been filed before Supreme Court seeking to remove the words ‘Socialistic’ and ‘Secular’ from the Preamble of our Constitution which were added through 42nd constitutional amendment act. In this blog let’s understand the pure concept of socialist and secular, the ever talked exclusion and inclusion of the terms in our constitution and the question can we delete these words from our constitution.

The Public Interest Litigation has been filed by two advocates Balram Singh and Karunesh Kumar Shukla and an individual Parvesh Kumar through advocate Vishnu Shankar Jain. The PIL said that amendment in 1976 which added the words Secular and Socialistic was ” antithetical to constitutional tenets as well as historical and cultural theme of India”
It also stated the words “per se illegal” for violating the concept of freedom of speech and expression in article 19(1)(a) of the Constitution and the right to freedom of religion under article 25. It must be by the logic that allows atheists not to believe in theory of god in same way, people should also have the right not to believe in ideals like Secularism and Socialism.
The PIL also challenged the insertion of words Secularism and Socialism in Section 29 A (5) of Representation of People Act that makes it compulsory for political parties to make specific provision in it’s memorandum of rules and regulation that association or body shall bear true faith and allegiance to the Constitution of India as by law established and to the principles of ‘Socialistic’ and ‘Secular’ and democracy and would uphold the sovereignty and integrity of India.
Let’s understand the concept of Secular and socialism in simplest way possible.

Socialism is an Umbrella terms which have a lot of different variation of its meaning. In it’s most simple form, Socialism is when population collectively owns and controls, the means of production and distributes the end result proportionally. The end all purpose is to guarantee a level playing field for members of society, thereby removing class distinctions based on ownership.
For an example- In United States of America’s capitalistic society, high quality education is expensive, meaning that those who can afford it are generally given better opportunities. This leads to class inequality on basis of wealth. whereas in Nordic Countries like Finland, where high quality education is free, everyone is given same opportunities to succeed regardless of their financial status. So, basically it emphasizes on providing same set of opportunities to all class and sections of the society.
Socialism originated loosely around 1830 to 1860 when many thinkers described a state of ‘UTOPIA’ (ideal futuristic society). Utopian Socialism is the earliest modern form of socialism.
There is no country with hundred percent socialistic nature, but rather, different socio-economic system with socialist undertone. There are two most dominant variations of socialism i.e. Marxism and Leninism Form of Socialism like in China which prioritize infallibility of its dictatorship government, with rationale that any benefit to state would also be benefit for people; and Social Democracy as in Sweden which prioritize improving quality of life through equal rights and opportunities bolted by state run welfare system and on top of a capitalist economy. Although both strive for similar utopian socialistic goals, the way they approach them is very different.
India has always strived to make itself a socialist and welfare state right from its days of freedom struggle. The idea of socialism in India is very much influenced by Mahatma Gandhi’s idea of welfare state and according to which the constitution incorporated the idea. Mahatma Gandhi’s idea of protection of village industries, weaker and backward section have have all found resonance in India. There is fine balance between Socialism and Capitalism in India.

“Erecting the wall of separation between church and state is absolutely essential in free society” – Thomas Jefferson
Secularism emerged in 18th century as a result of age of religious wars in 16th, 17th and 18th century in Europe. 30th Years War( 1618- 1648) preceded by election of new holy Roman Emperor, Ferdinand II who tried to impose religious uniformity on is domain, forcing Roman Catholicism on its people. It began as religious civil war between Protestants and Roman Catholics in Germany and engaged Austrian Habsburg and German Prince.
The War soon developed into devastating struggle for balance of power in Europe. The end of it was by the the Peace of Westphalia when powers in war decides to come up with new order based upon peaceful co- existence among sovereign states.
Eventually Philosopher like John Locke identified it as one predictable consequence of state sponsored religion was that states would go to war over religion.

The term Secular was coined by British Reformer George Jacob Holyoake in 1851 to describe his views of promoting a social order separate from religion, without actively dismissing or criticizing any religious beliefs.
Secularism in India
In India Secularism was interpreted and incorporated by Nehru, Mahatma Gandhi’s view and Multi culturist view.
Mahatma Gadhi’s concept ( Sarva Dharm Sama Bhava which means equality to all religion) was based on two ideas;
1. India is deeply religious society as a result of which public life and religion cannot be seperated.
2. Person’s religion is important to him, so, he will respect others religion too.
Jawaharlal Nehru’s concept Dharma Nirpekshta i.e. religion should be a private matter and should not play a role in guiding public life.
Multi Culturist view of Hindu Right Wing said that there is difference between India and western society so, we cannot adopt entirely western concept. In India there is a vivid sense of common identity and this can only come from religion.
After Independence Nehru and Gandhian view was adopted with the idea that;
1. State shall permit freedom of practicing any religion.
2. State shall not associate with any religion with any particular religion.
3. State shall honor all faiths equally (this view is in light of Mahatma Gandhi’s view and was innovation of Indian Secularism)
In spite of the Secular concept in entire Constitutional framework term secular is nowhere defined in the constitution and was not even included in it before the 42th amendment act. But our Judiciary from time to time have defined and interpreted the term in various context.
Supreme Court on 24th April 1973 with then full strength of 13 judges, ruled in Kesavananda Bharti case that secularism was part of Basic Structure and that elements constituting the basic structure are beyond parliaments power to amend.
In S.R Bommai Vs. Union of India 1994
The Apex court held that secularism is the part of basic structure and it is derived from cultural principle of tolerance and ensures the equality of religions. Justice Rammaswamy also ruled the essential connection between Secularism and Democracy.
Abhiram Singh vs C.D. Commachen 2016
Amidst acrimonious legal debate on curbing role of religion in electioneering, the court held that secularism does not mean that state shall stay aloof from religion but to give equal treatment to all religion.

Why the words Socialistic and Secular was not included by the constituent assembly?

There was many illuminating debates in the assembly for addition or exclusion of the terms in constitution. Professor K.T Shah wanted to include the words in the first article of the constitution, and stated that our country is a secular one and there is no reason to exclude these terms from our constitution.
Dr. B.R Ambedkar objected that our constitution is only a mechanism for purpose of regulating work of various organs of state, it is not the mechanism whereby particular member are installed in office, what should be the policy of state , how society should be organized are matters decided by people according to time and circumstances and stating in constitution that social organization of state shall take place in a particular manner, would be taking away the liberty of of people to decide that what should be social organization in which they wish to live. And secondly he stated that inclusion of words is purely superfluous as our entire constitutional framework imbeds these principles.
The 42nd Constitutional Amendment Act
It would be fallacious to argue that the original constitution as adopted was not secular and socialistic as it was all implicit in the constitution. The guarantee of equality in Article 14; the promise of non-discrimination in Articles 15 and 16; protection from religious taxes and religious instruction in state-funded institutions set in Articles 27 and 28; the permission of educational institutions of choice to linguistic and religious minorities in Articles 29 and 30; the promise of equal ballots devoid of sectional preferences in Article 325 — all make for a constitutional architecture which is devoid of any religious preference whatsoever.
The Section 2 (a) of 42nd Constitutional amendment act inserted the words Secular and Socialist in the Preamble of our Constitution just after the emergency in 1976. It resurrected Prof. K.T Shah’s suggestion to insert these words in the constitution.

After Emergency, Janta party undid the most of the damage by the amendment but chose to preserved the words Secular and Socialism in the constitution as it just “expressed explicitly what was implicit”.

The idea of Preamble was laid down by J.N Nehru’s Objectives Resolution adopted by constituent assembly on 22nd January 1947. Although not enforceable in court, Preamble states the objective of constitution and acts as an aid during the interpretation of articles of constitution. The words socialistic and secular in the preamble shows the nature of our constitution.
In Berubari Case, the court stated that preamble is the key to open minds of its makers but cannot be considered as a part of constitution.
In Kesavananda Bharti case the court held that preamble is part of our constitution and can be amended but the basic structure cannot be tampered, and in S.R. Bommai case it was held that the term Secular is included in the basic structure.

Government can remove the words from our Preamble in same way in which it was added in 1977, but this will in no way alter the position of India’s Secular and Socialistic nature.

Socialistic and Secular: Farrago of its inclusion and exclusion

9 thoughts on “Socialistic and Secular: Farrago of its inclusion and exclusion”

Hi, I'm Aditya Ratna, an aspiring blogger with an obsession with law. This blog dedicated to help people learn about legal aspects of everything around them in lucid manner.

View all posts
Scroll to top