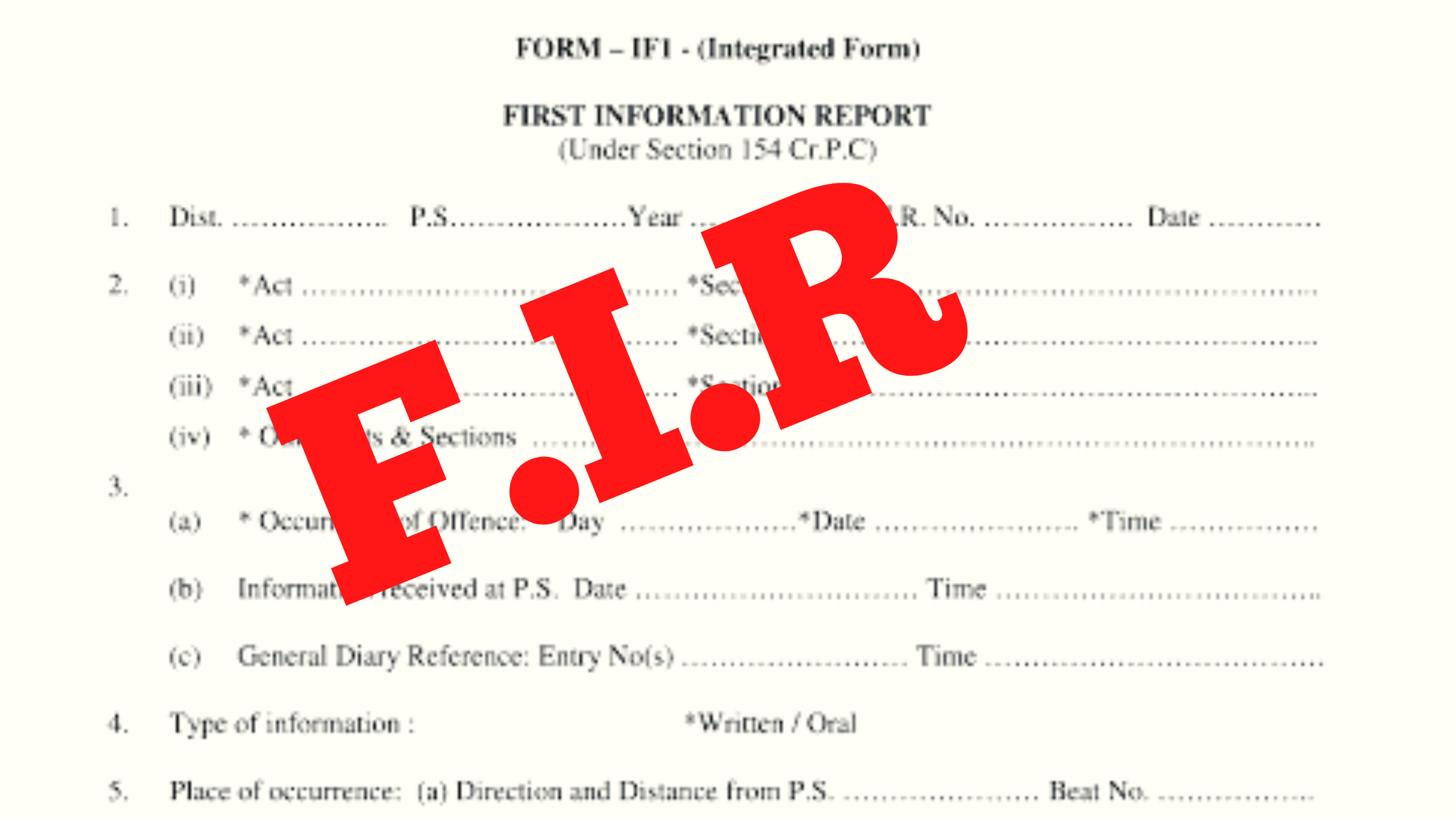 This blog covers complete aspects of FIR under the Criminal Procedural code,1973, its registration, consequences of non registration by informant and a police officer in charge of police station and its evidentiary value in court of law.

The term FIR is not mentioned in any statutes but the statement of informant given to an Officer in charge of Police Station at first instance under section 154 of Criminal Procedure Code, 1973 is popularly understood as FIR. The FIR sets the criminal law in motion and is the first step to access justice which cannot be refused by a police officer or cannot even be usurped by the Magistrate. Though FIR is not intended to be a catalogue of events, but it is expected to contain basic features of prosecution’s case. It must not be vague but definite enough to enable the police to start investigation.
Supreme Court in State of Uttar Pradesh V. R.K Srivastava (1989) observed that if the allegations made in FIR are taken at their face value and accepted in their entirety, do not constitute an offence, the criminal proceedings instituted on basis of FIR should be quashed.

Let us breakdown verbatim Section 154 of the code to get a clear understanding of legislative intent.
Section 154
(1) Every information of Cognizable offence (offences on which police officer may, in accordance with the First Schedule of the code or under any other arrest without warrant)
if given to Officer in charge of Police Station,
Shall (mandatory in nature) be reduced to writing
and be read over to informant and shall be signed by Informant.
and the substance shall be entered in book to kept by such officer in such form and manner as the State government may prescribe.

In the case of E S Praveen Kumar V. State of Karnataka 2022
the Karnataka High Court observed that it is well settled that the officers in charge of police station includes Inspector of police, Police Sub-Inspector, Assistant Sub-Inspector and a Head Constable not below rank of police constable.

154(2) Copy of Information recorded shall be given forthwith, free of cost, to informant.
This provision ensures the accuracy of FIR. The code also requires FIR to be recorded verbatim in language of informant to be read over and explained to him, and to be signed by him. The idea behind this is to ensure the correctness and faithful version of information

Provided that- if information is given by woman who alleges offence under Indian Penal code 1860, section,
326(A) and (B) – Causing grievous hurt by acid, etc. and voluntarily throwing or attempting to throw acid.
354- Assault or criminal force to women with intent to outrage her modesty.
354 (A)- Sexual harassment, (B) Assault of criminal force to disrobe, (C) voyeurism, (D) Stalking
376- Punishment for Rape,
376(A) Rape causing death or persistent vegetative state, (B)- rape by husband during decree of separation , (C)- by person in authority, (D)- Gang Rape, (E)-Repeat offenders,
509– words, act or gesture to insult modesty of women
Shall be recorded by a woman Police officer or any woman officer.
And if such person is temporarily or permanently, mentally or physically disabled, such information shall be recorded at residence of that person or at any convenient place in presence of an interpreter or special educator.
Such recording shall be video graphed and officer shall get statement recorded by Judicial Magistrate under section164(5A) of the code as soon as possible.

FIR and Right to Liberty

Rights of an accused of life and Liberty, under Article 21,is protected even after registration of FIR. It is an imaginary fear that merely because FIR has been registered, it would require arrest of accused and thereby leading to loss of reputation. In Lalita Kumari V. State of Uttar Pradesh 2014,
Court observed that just because of this fear the Court cannot hold that the registration of FIR is not mandatory. The remedy could be to strictly enforce safeguards available against arbitrary arrest and and many other which protect liberty of an individual in case of false FIR like- Quashing of FIR under section 482 of the code, Anticipatory bail, and even Writ petitions. Therefore we can come at a cogent view that FIR is not in contravention of Article 21.

Effect of delay in lodging FIR

Courts attach great importance to lodging of prompt FIR as this ensures that any possibility of accused being falsely implicated and the witness being tutored is minimized.
However, the mere fact that FIR has been lodged early does not rule out embellishment or falsehood in every case. Thus, no duration of time in abstract can be fixed as reasonable for giving information to police. The plausibility of explanation for delay in FIR is to be considered on case to case basis.
The normal rule is that the prosecution has to explain the delay and also have to prove that there is no prejudice due to delay.
In Harpal Singh V. State of Himanchal Pradesh 1981 , the explanation in rape case for delay in lodging FIR that as honor of family of prosecutrix was involved the members of family had taken time to decide, was held to be reasonable explanation for the delay.

In the case of Lalita Kumari V. State of Uttar Pradesh, 2014 ,
the most important issue was that whether police officer is bound to register FIR upon receiving any information relating to cognizable offence or to conduct any preliminary investigation to test the veracity of such information before lodging the FIR.
The honorable Court interpreted the word “Shall” in the Section and observed that the word needs to be given its ordinary meaning of being “mandatory character”.
The Section do not admits any discretion on police officer in charge for embarking any preliminary inquiry prior lodging of FIR.
Recourse if FIR not Registered:
The object of FIR will be defeated if a police officer in charge refuses to lodge FIR, therefore sub-section (3) of section 154 of the code provides for its remedy.
In case an officer in charge refuses to exercise jurisdiction vested in him and to register a case and violates statutory duty cast upon him, the aggrieved person can send substance of such information in writing and by post to the Superintendent of police concerned who if satisfied that information forwarded to him discloses a cognizable offence, should either investigate himself or direct investigation to be made by any police officer subordinate to him, and the officer delegated shall have same powers as officer in charge of Police Station in relation to that offence.
The informant can also directly file a private complaint before concerned Judicial magistrate under section 156(3) with section 190 of the code, where the magistrate can take cognizance of the case and direct the police officer to investigate.
The informant can also file in different jurisdiction which is popularly known as Zero FIR, where the different police station will transfer the case to correct jurisdiction station and the concerned officer will have to take cognizance.
The Informant can also file a writ petition of Mandamus (a judicial writ issued as a command to an inferior court or ordering a person to perform a public or statutory duty) in concerned High court under Article 226 or Article 32 and can even ask for compensation. Such police officer can also be punished according the provision of Indian Peal Code,1860 under sections 166A.

FIR is a public document and a certified copy can be used for evidence in court of law. It is well settled that a FIR is not substantive evidence and can only be used to corroborate the testimony of witness if the informant comes as a witness at trial under section 157 and can be used to cross- examine informant and contradict him under section 145, of Evidence Act, 1872, but it cannot be used against the maker if he becomes or is the accused. If the FIR is of confessional nature it cannot be proved against the informant/maker as under section 25, Evidence Act ‘no confession given to a police officer shall be proved against a person’, though it may be admissible as admission under section 21 or to show his conduct under section 8 of Evidence Act.
FIR can be used as Dying declaration in certain cases. You can read it more about it here-
Dying Declaration.

Non-cognizable offences are considered as private wrongs and investigation into such offences is not the responsibility of police officers unless ordered by concerned magistrate according to the provisions to the code. If any person gives information as to any non-cognizable offence to an officer, he shall enter or cause to enter the substances of the information in a book prescribed and refer the informant to the Magistrate.

FIR is first step to access justice for victim and upholds the ‘rule of law’ as it brings forth the commission of offence of cognizable offence to knowledge of state.

Hi, I'm Aditya Ratna, an aspiring blogger with an obsession with law. This blog dedicated to help people learn about legal aspects of everything around them in lucid manner.

View all posts
Scroll to top