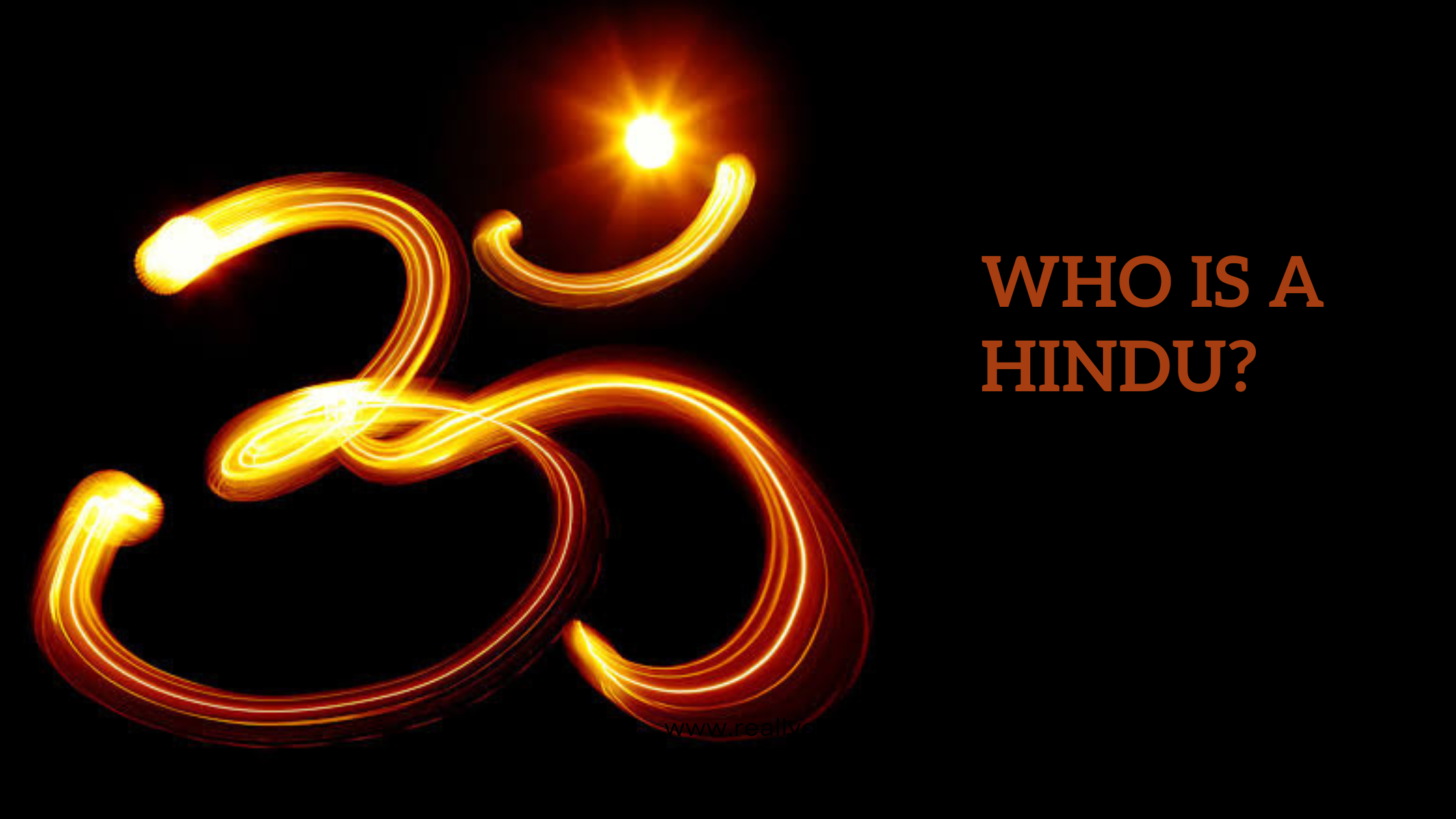 No Comments on Who is a Hindu?Posted in Family Law By linearlawPosted on May 7, 2022July 12, 2022Tagged family law, Hindu law, Hindu marriage Act, Who is a hindu

This blog covers significant and the foundational part of Hindu personal law, schools of Hindu law, its sources, constitutional position and the answer to the question who can be governed by Hindu law and who is a Hindu?

A Catholic is a Catholic because he believes Jesus was son of God, a Muslim believes that there is nothing above Allah, but who is a Hindu? The obvious answer would be that children born of Hindu parents, but is there any binding requirements to be a Hindu and who are included in this broad term?

The term Hindu was not in any Dharmashastra (धर्मशास्त्र) or in any Indian language till it was given to us by foreigners and has its origin on the basis of geography from word ‘Sindhu’ for the people who settled around Sindhu River (now Indus River). In French and Persian the word for Indian is ‘Hindu’. Later after 16th century the term Hindu was used to identify people who were not Christians or Muslims giving it a negative definition i.e. who are not Hindus rather than a positive definition of who are Hindus.
Hindu Law Committee on 20th of January, 1944 under its chairman B. N. Rau prepared a draft code for Hindu law dealing on subjects of intestate succession, marriage, divorce , guardianship and adoption. The Hindu Marriage Act, 1955 answers the question of who can be governed by Hindu law and who is a Hindu?

All Hindu law originated from the Vedas (Shruti i.e. “that which was heard”) and Smriti (“that which was recollected”) example Manusmriti(मनुस्मृति), Yajnavalkya Smriti and Smritis of Parashar, Apastamba, Vashist et cetera. These Smirtis were not laws made by parliament or some legislature but books written by certain Sanskrit Scholar. Later Commentaries called Nibandhas (निबंध) were written on Smritis example – Commentary of Vijaneshwar i.e. Mitakshara on Yajnavalkya Smriti,
Jimutvahan wrote Dayabhaga which was a digest of all Smriti,
Nanda Pandit’s Commentary Dattak Mimansa (दत्तक मीमांसा ) deals specifically with Laws of Adoption, et cetera. Commentaries were then written on these commentaries, example Viramitrodaya, which is a commentary on the Mitakshara (which founded the Banaras School of Mitakshara).
All Hindu laws originally was customary law and there was no statutory law in ancient India. The problem with that, it was often vague and uncertain for an example customary rules laid down that property will devolve to son after his death but could not tell what if he had no son. Hence, text books were required to deal with this problem and was fulfilled by Smriti and commentaries in ancient India.

Hindu Law is divided in two parts, Mitakshara, which prevailed over whole India except Bengal and Assam, and Dayabhaga, which prevailed in Bengal and Assam. The difference arose because two different interpretation were given by the commentators to one word “pind”.
Dayabhaga is a commentary on Manusmriti and Mitakshara is on Yajnavalkya Smriti.
Manusmriti is not a systematic work in which we can find one shloka dealing with religion, next with law and third with morality. On the other hand Yajnavalkya separated religion and morality and is divided in three chapters namely:
Achara (religion and morality), Vyavahara ( law) and Prayaschit (Penance).

What is Hindu Law?

In brief, Hindu law was not stagnant but it underwent continuous development as society developed and this was aided by the creative thinking of our jurists. Basic structure of ancient Hindu law laid down in smriti is supplemented by customs. Subsequently it made remarkable progress during past smriti period (7th century A.D) when number of commentaries and digests were written because Smriti was difficult to understand and interpret.
According to Mayne in Treaties on Hindu law and usage ” Hindu law is the law of smriti as expounded in Sanskrit commentaries and digests which, as modified and supplemented by customs, is administered by courts”

According to Dinshah Mulla there are three major sources of Hindu dharma or Law- 1. Shruti, 2. Smriti, and 3. Customs.
A practical division of sources of Hindu law would be the original text of Dhramashastra, the commentaries and digests and customs.
Hindu law in present is the result of many ingredients, to these main sources must be added for all practical purposes, auxiliary indices of justice, equality and good conscience ( a colonial import to resolve where no law is available), judicial decision and legislative enactment.

When we think of Hindu religion we find it difficult to define or even describe it. Unlike other religion, Hindu does not claim any one prophet, it does not worship one God. It has no dogma attached to it. It does not believes in any one philosophic concept, in fact it does not appear to satisfy traditional features of a religion.
Beneath the diversity of philosophic thoughts, concepts and ideas expressed by Hindu philosophers who started different philosophic School, lie certain broad concept which can be treated as basic concept. The first amongst these basic concept is acceptance of Veda as highest authority in religious and philosophic matters.

The development of Hindu religion and philosophy shows from time to time its saints and religious reforms, which were an attempt to remove thought and practices which were elements of corruption and superstition that led to different sects. For example-
Gautam Buddha started Buddhism, Mahavir Jain started Jainism, Basavanna started Lingayat, Guru Nanak founded Sikhism, Dayanand Saraswati started Arya Samaj and many more.
But underneath this divergence, there is a kind of subtle indescribable unity which keeps them within sweep of broad Hinduism.
In Bhagwan Koer vs J.C Bose 1903
The apex court observed that the Hindu religion is marvellously catholic and elastic. Its theology is marked by eclecticism and tolerance and almost unlimited freedom of private worship. Its social code is much more stringent, but amongst its different caste and section exhibits wide diversity of practice. It is easier to say who are not Hindus than to who is a Hindu.
According to section 2(1) of the Hindu Marriage Act 1955 the act applies to Hindu-
a) to any person who is by religion in any of its form or developments, including a Virashaiva, a Lingayat or a follower of Brahmo, Prarthna or Arya Samaj,
b) to any person who is Buddhist, Jain or Sikh by religion,
Section 2(1) c) provides for negative definition i.e. to any person domiciled to which this Act extends, who is not Muslims, Christian, Parsi, Jew by religion, unless it is proved that such person would not have been governed by Hindu Law or by customs or usage as part of that in respect of any matters dealt with herein if this Act had not been passed.
The following person are Hindu if they are Buddhist, Jain or Sikh by religion or
a) any child , legitimate or illegitimate, both of whose parents are Hindu, Buddhist, Jain or Sikh,
b)any child legitimate or illegitimate, one of whose parents are Hindu, Buddhist, Jain or Sikh and who is brought up as member of the tribe, community, group or family to which such parents belongs or belonged.
c) any person who is converted or re-converted to Hindu, Buddhist , Jain or Sikh.
According to section 2(3) the Expression “Hindu” in any portion of this Act shall be construed as if it included a person who, though not Hindu by religion, is nevertheless, a person to whom this Act applies by virtue of this section.

Constitutional makers were fully conscious of this broad and comprehensive character of Hindu religion and so, while guaranteeing the Fundamental rights to freedom of religion, explanation 2 of Article 25 made it clear that in sub clause(b) of clause (2), the reference to Hindus shall be construed as including a reference to previous professing the Sikh, Jain or Buddhist religion and reference to Hindu religious institution shall be construed accordingly.

Consistently with the constitutional provision and Judicial interpretations, the Hindu personal laws like Hindu Marriage Act 1955, Hindu Succession Act, 1956, Hindu Minority and guardianship Act 1956 and Hindu adoption and Maintenance Act, 1956 have extended the application of the Laws to all persons who are Hindus and its developments and offshoots including Buddhist, Jain and Sikhism who can be regarded as Hindus in this broad and comprehensive sense.